Cycleways in East Leeds: a Photoblog

Taking advantage of a sunny Sunday, a friend and I decided to check-out some recent active travel infrastructure developments in East Leeds. We planned the route around two destinations and one well-established route:

An overview of the route is shown below:

Leeds Climate Innovation District (LCID) is a major development in Leeds, with 500+ dwellings either in the process of being built or already being lived in (at the time of writing in April 2021). I cannot comment on the energy efficiency ratings of the buildings (although I have little doubt that they are well insulated) but in terms of its appearance and accessibility by walking and cycling it is ground-breaking. It is located on the East of the River Aire and to the West of the A61, a major road that wouldn’t seem to provide a basis for sustainable and healthy living, as shown below. 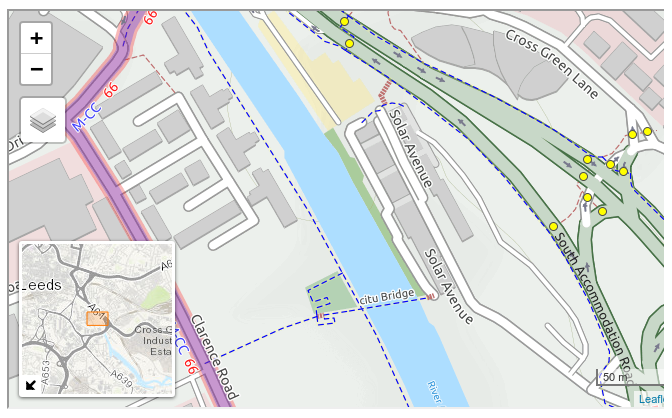 I had heard of LCID and passed by it during early stages of construction but only appreciated its scale and level and ambition today after seeing the site. In the spring sunshine it was stunning, as shown in the photo below. 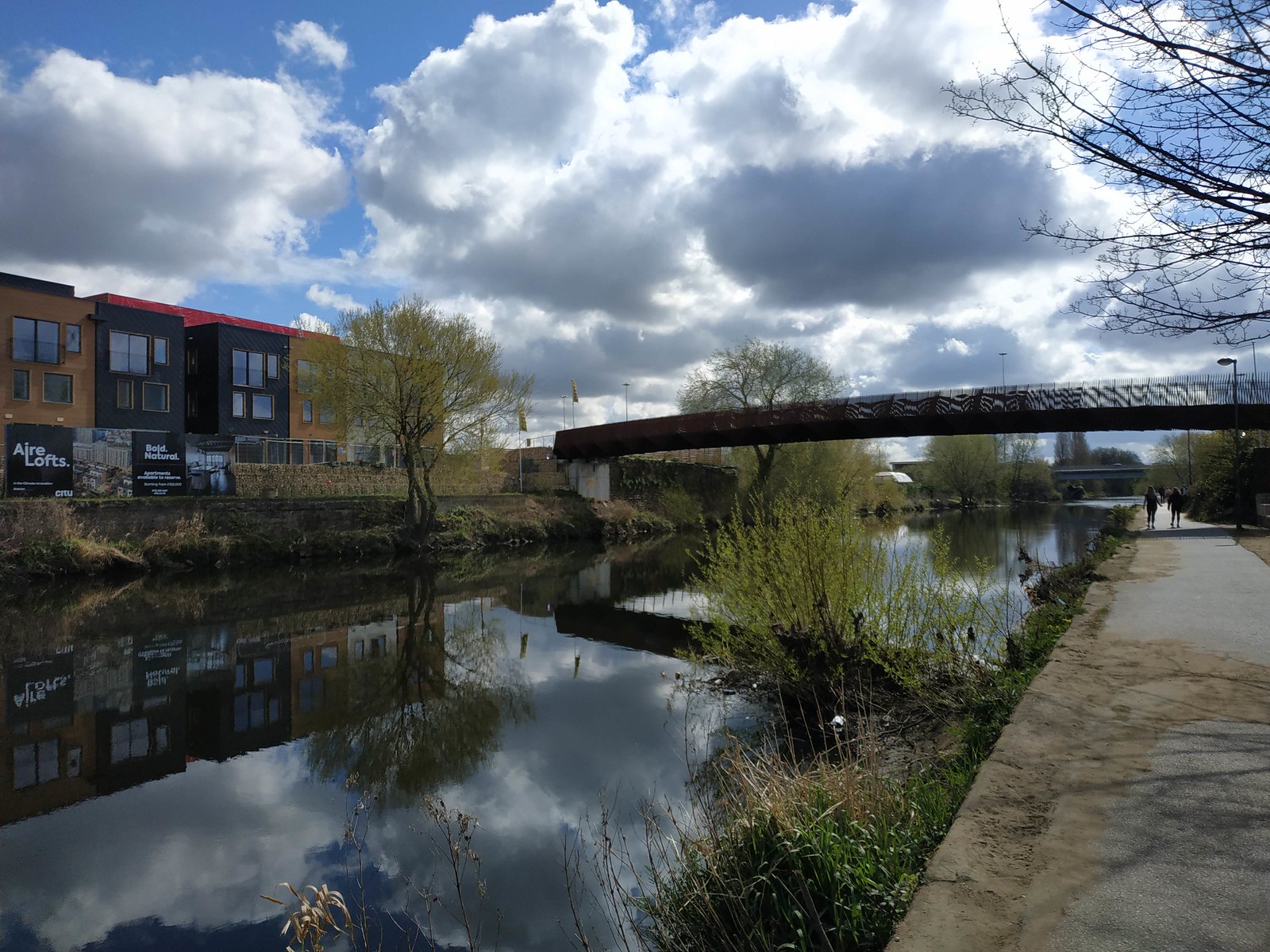 My more immediate interest in the project was due to work. The LCID is one of the case study sites we used to highlight the potential for the planning system to support active travel in the ActDev project. As can be seen at actdev.cyipt.bike/lcid/, the site performs well from a sustainable transport perspective, as shown below.

The data driven approach can hide important details on the ground that can help or hinder active travel. I was happy to see that the site had good accessibility to the key walking and cycling route to the West of the river, as shown in the photos below. 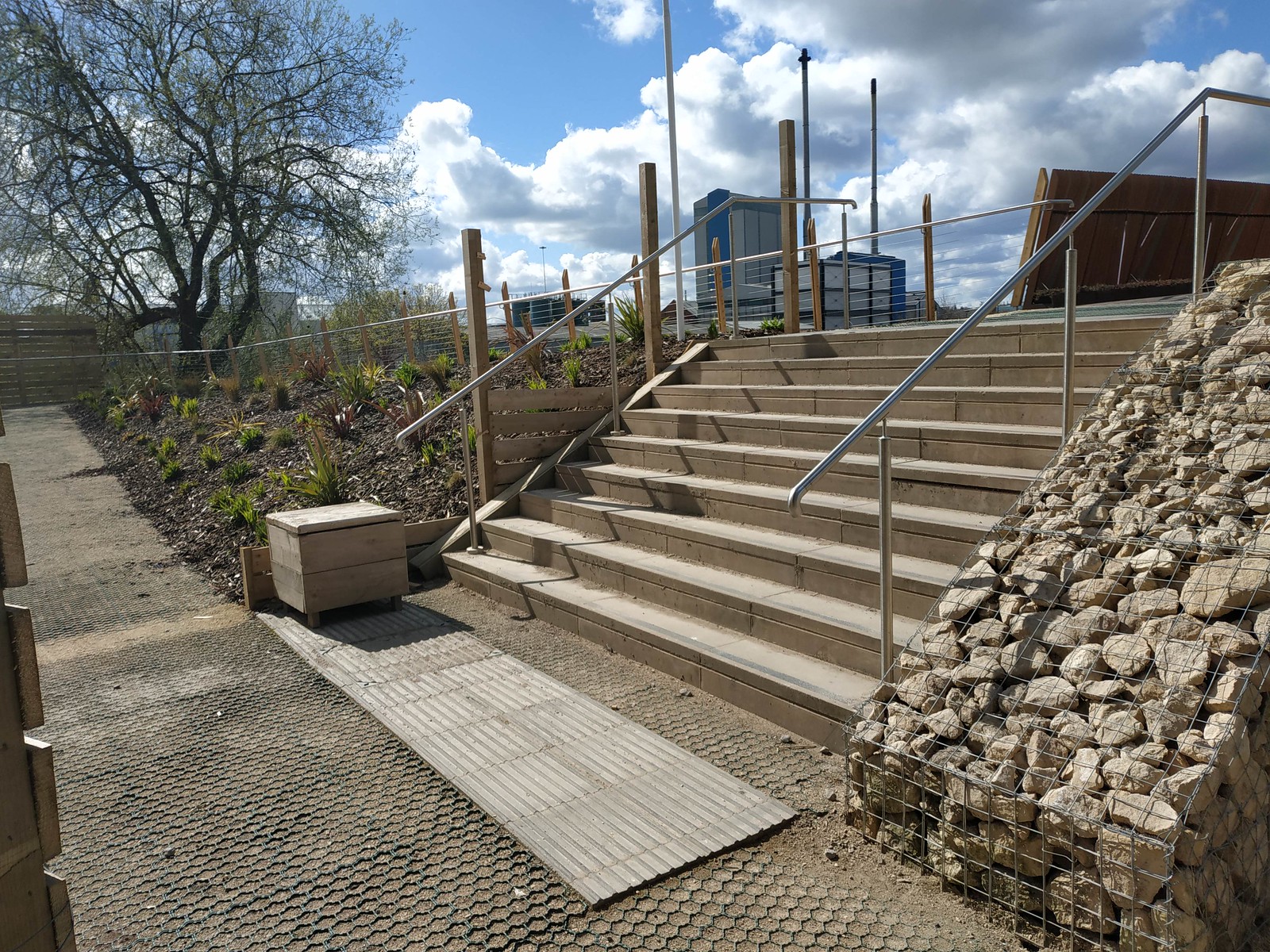 The walking and cycling provision on the LCID side of the river is good, with steps that are wide and a ramp for cycling, wheelchairs and pushchairs. The ramp onto the bridge from the East side of the river has a shallow incline, although is unnecessarily maze-like (possibly this is to reduce cycling speeds to the benefit of other users which seems sensible given the wide range of people using the path). 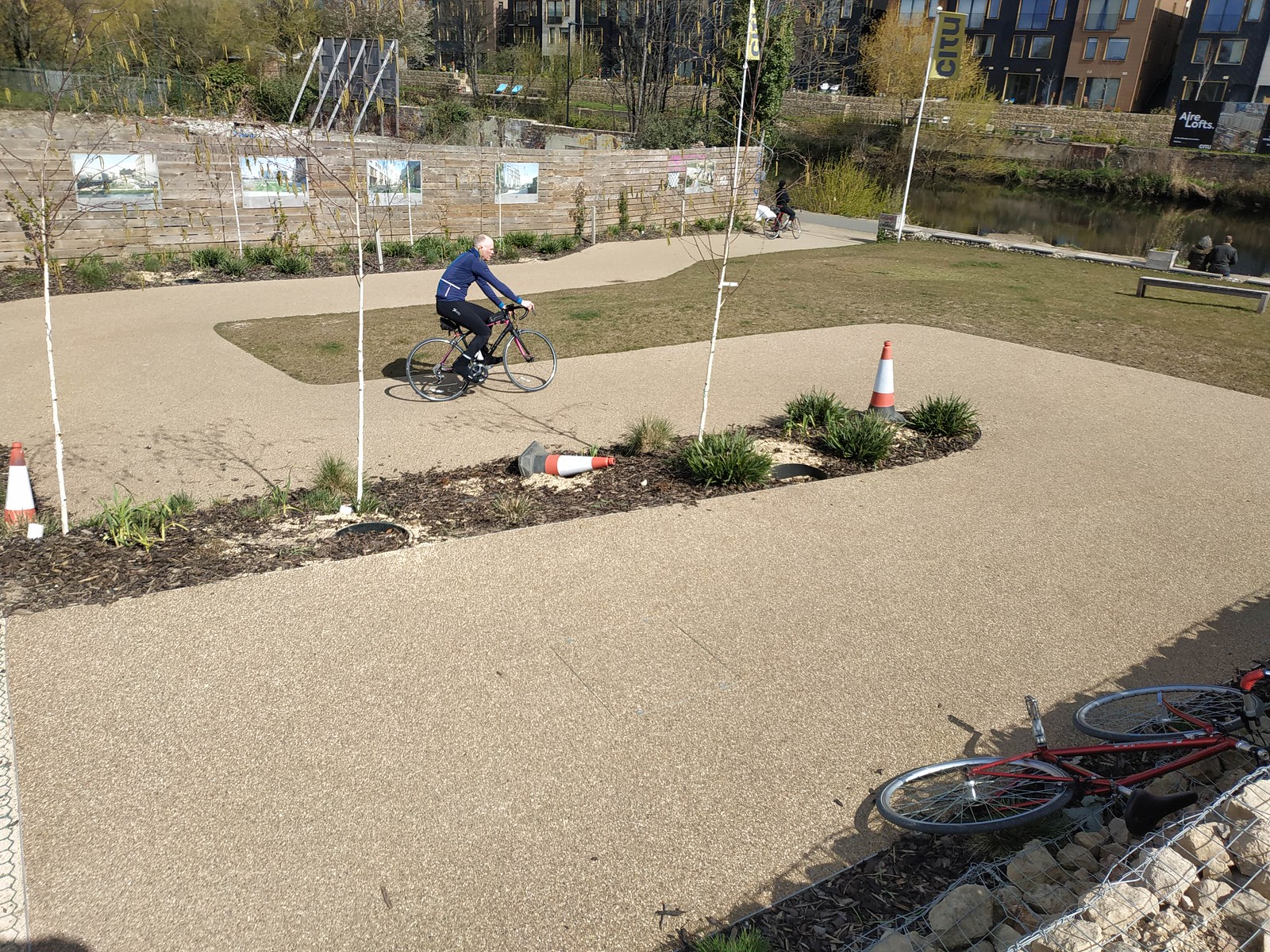 From the LCID we proceeded southeast along waterside cycleway that follows the River Aire all the way out to Allerton Bywater, which is another new housing development that is part of the ActDev project. The route has recently been resurfaced, as described in an article by Sustrans. Having used this cycleway for more almost a decade it is hard to put into words how much better it is after the upgrade, but I will try. It is waaaaaaaaaaaay better.

Before the upgrade the path was thin, bumpy and often muddy Now it is wide, smooth and attractive. The difference can be seen in the before/after photos below (credit: Sustrans). The surface is as smooth as tarmac on a road (smoother than most roads in Leeds, which have many potholes due to constant erosion by motor traffic) but has a rustic feel.

One issue with the route (that is already well documented and is the subject of a campaign by Leeds Cycling Campaign) is that you are forced onto steps to go from Skelton Grange Road bridge onto a cycleway located between the River Aire on the East and the Aire and Calder Navigation canal to West, as shown below. 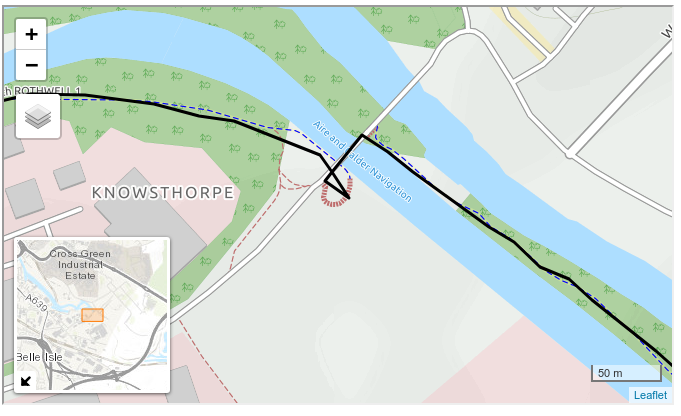 Aside from the steps, this section is also great to ride on and is part of the Trans Pennine Trail from Leeds to Sheffield 40 miles to the South. 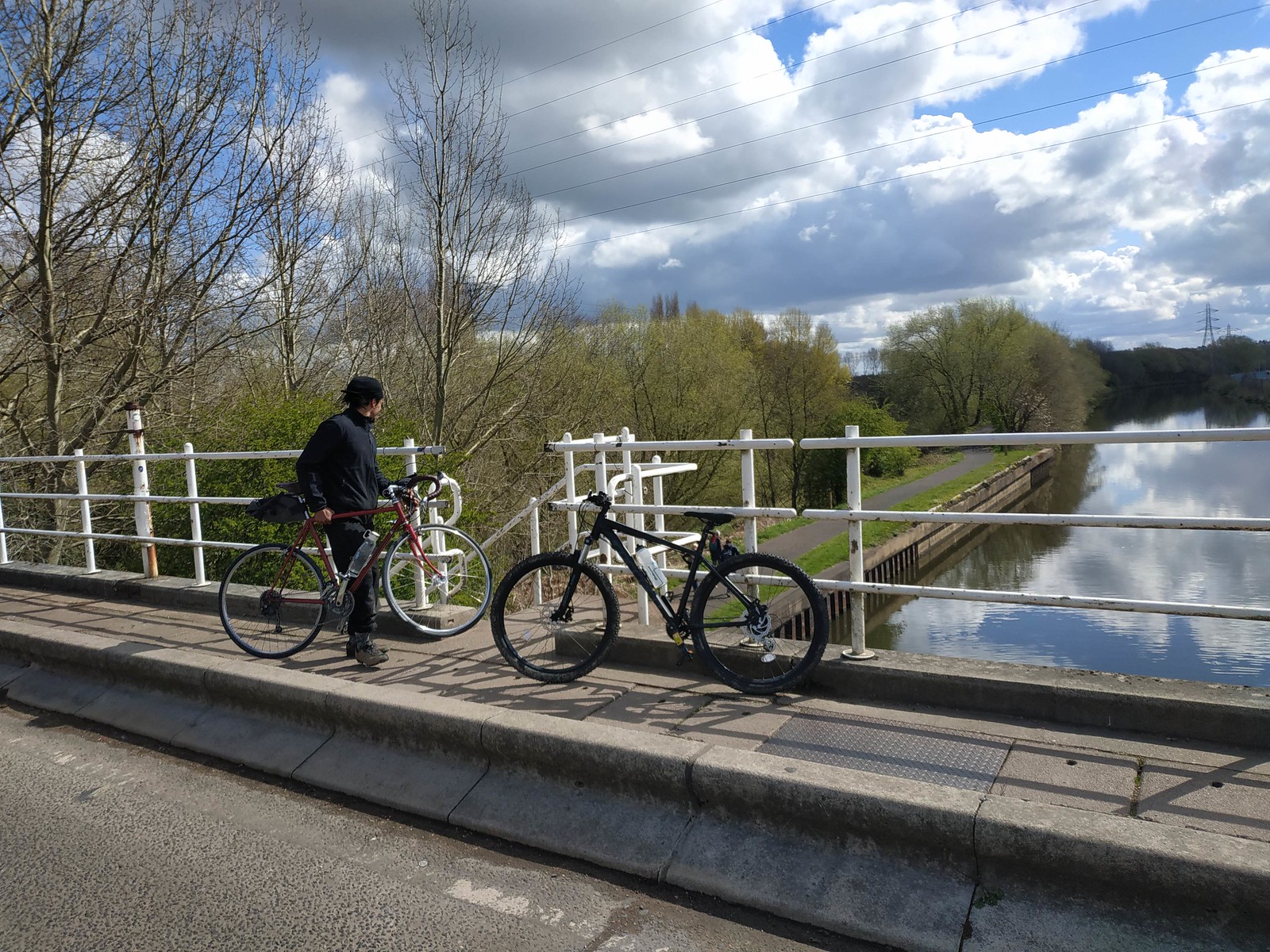 The most surprising aspect of the ride was the new walking and cycling infrastructure provided in and around a new service station serving the M1 motorway of all things. Despite its proximity to this huge highway, the site surrounding the Leeds Skelton Lake – M1 J45 services is outstandingly good for cycling and walking, with dedicated space inside the premises and a decent shared cycleway/pavement leading up to the M1, as shown below (note the petrol station, part of the Extra service station to the left). 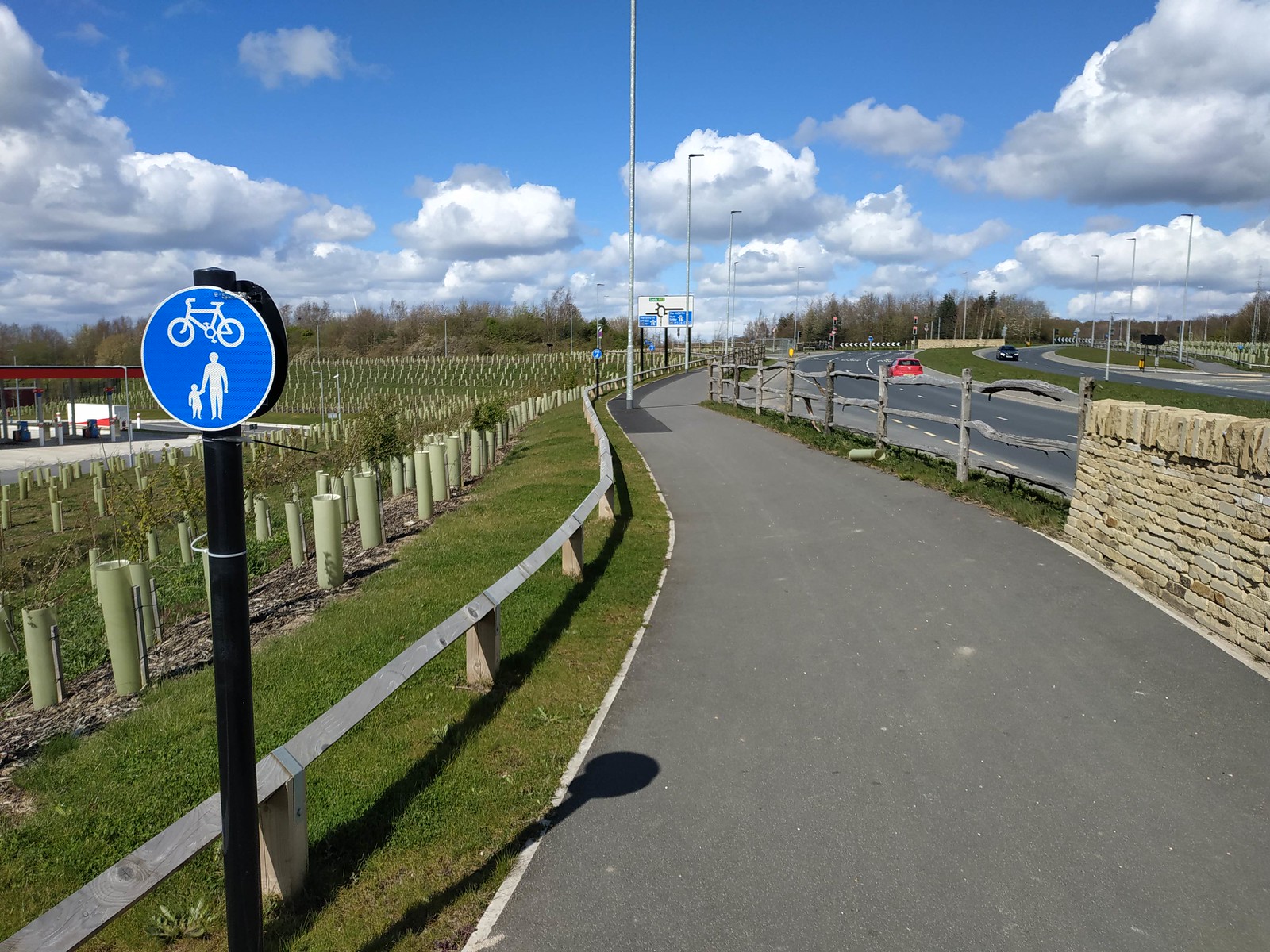 Crossing the huge roads to cross the M1 was possible but not ideal: the cycle infrastructure directly next to the motorway decreased substantially in quality compared with the rest of the route. 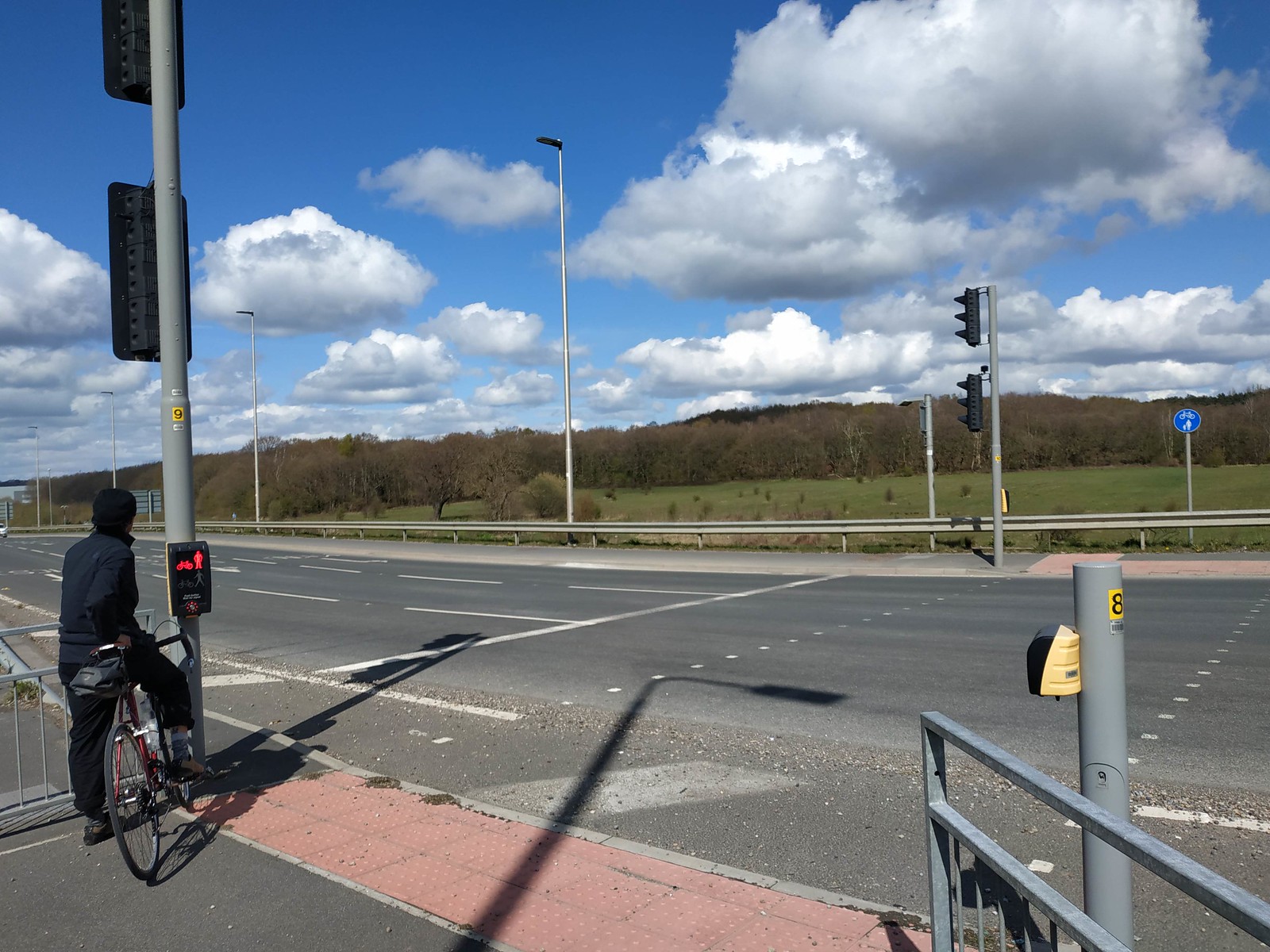 In addition to work to improve links with the Skelton Grange Road Bridge I imagine that investment in the quality of infrastructure leading to Temple Newsam, shown in the map below, would be well spent. 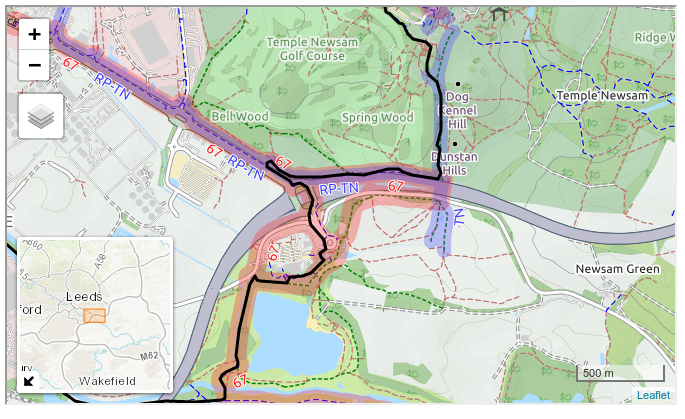 The Wyke Beck Way is an off road route that goes from Temple Newsam all the way to Roundhay Park, the biggest park in Leeds. We were briefly on this route leaving Temple Newsam and it was our plan to take this route from the Wykebeck Arms (shown below) back to North Leeds. 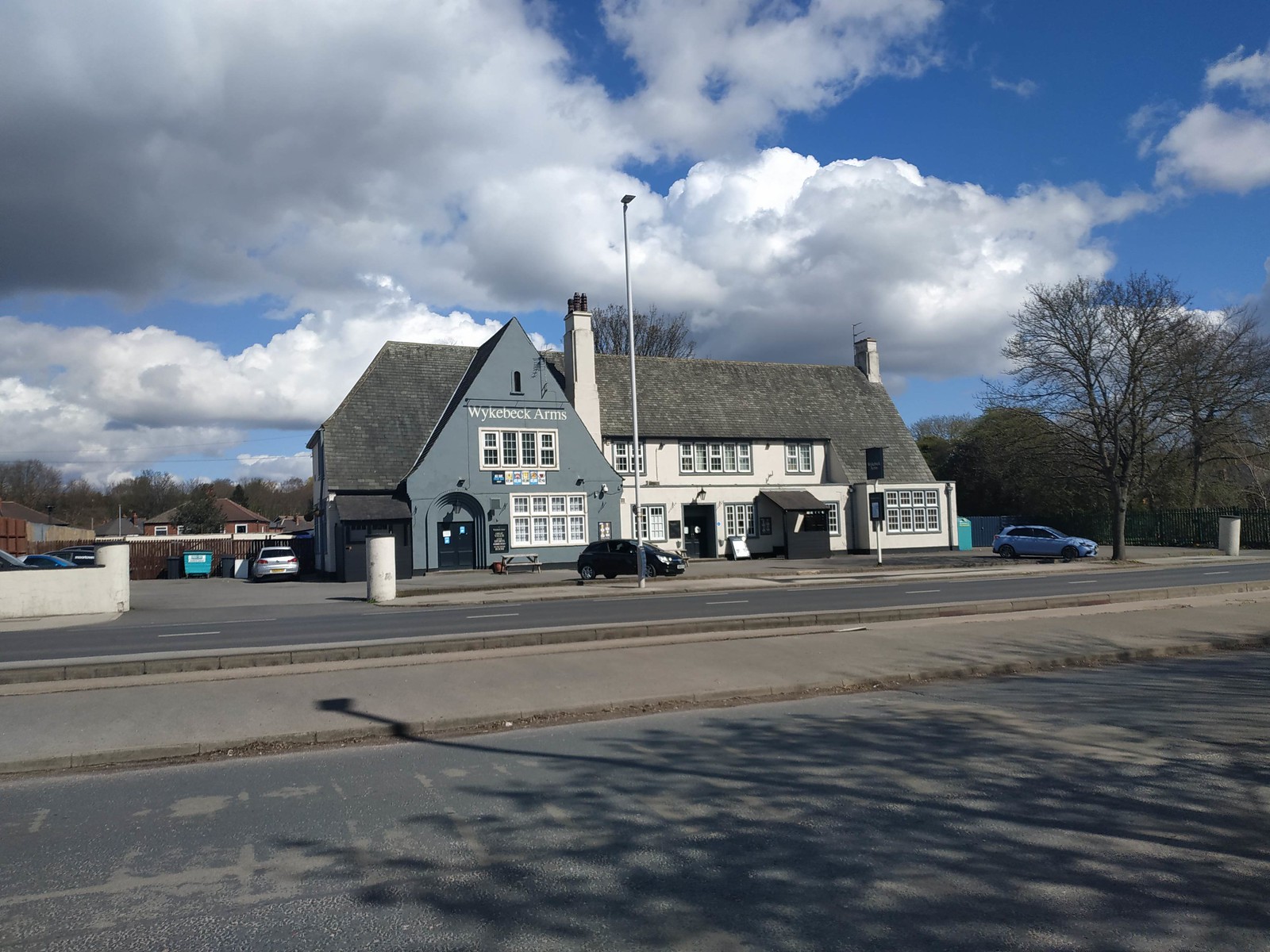 However, we decided to head East along the Leeds Cycle Superhighway 2. Less famous than the Leeds-Bradford ‘Superhighway 1’ this cycleway follows the A64 dual carriageway from Seacroft and Crossgates in the East to the city centre. Despite being (I guess) the most expensive piece of cycle infrastructure per km (with dedicated cycleways in urban areas costing ~£1k/m which is still much cheaper than motorways that cost around 50 times more m), this was also the most disappointing. The superhighway had very few people walking and cycling on it compared with the busy yet not crowded river route. It was not a particularly pleasant experience, as shown in the figure below, but was much better than cycling on the road would have been. 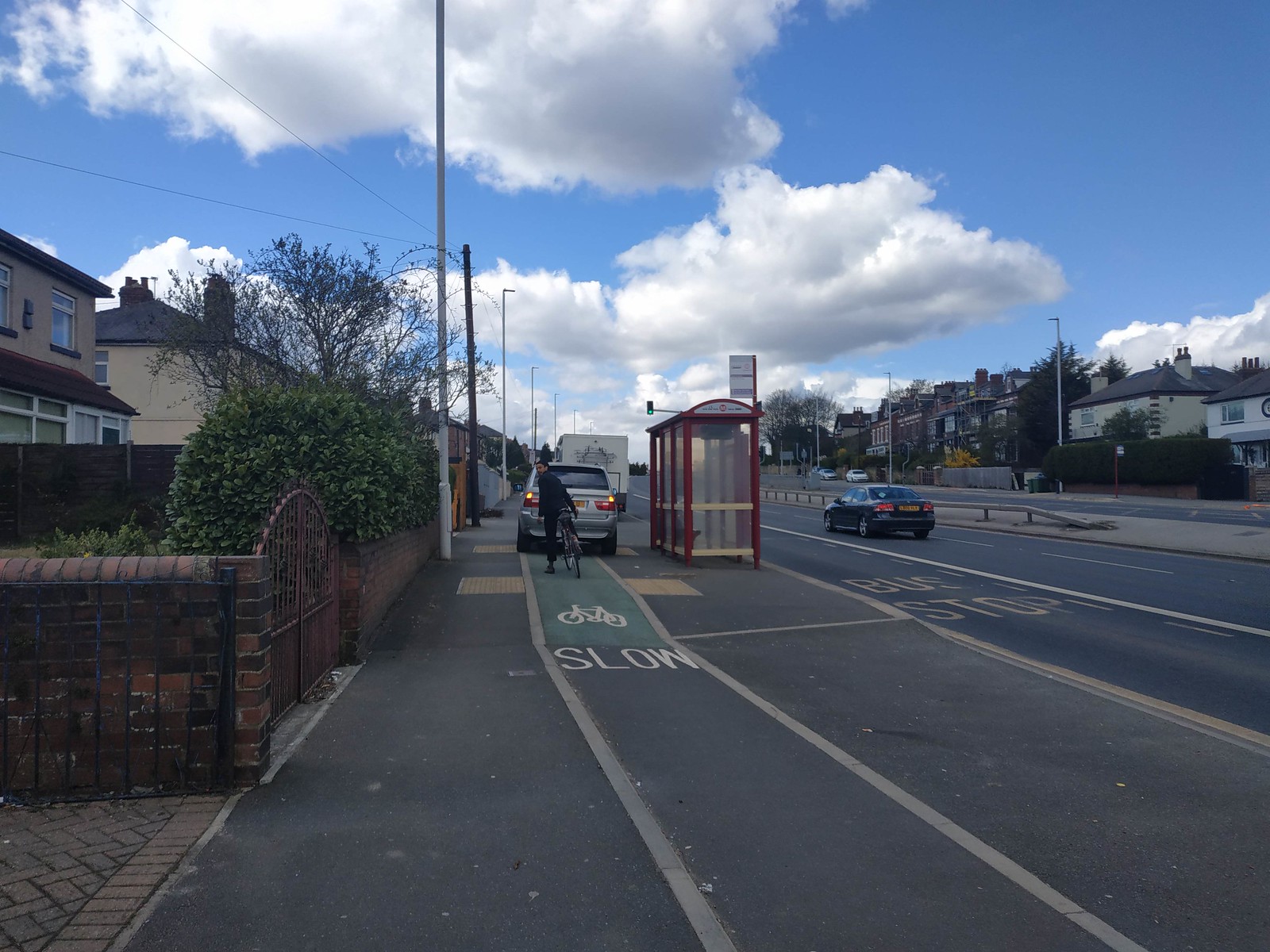 After following the superhighway for a mile or so we took right onto Harehills lane. This was the longest on road section and I would not recommend it to inexperienced cyclists, certainly not the ‘8 and 80 year-olds’ and less able bodied people who we should be designing for. Still, if you are confident on a bike, it is a great route: going down onto Roundhay you have a great view of this part of the city.

In terms of where to next, I plan to try routes in different parts of the city to see how they have changed. Overall I am really impressed at the changes I’ve seen in urban infrastructure described in this blog post. I hope other changes have been equally good and that the momentum in a positive direction continues.