The mission was to get from my current place in Leeds to my home town of Hereford. It’s 178 miles by motorway and a long and pricey trip by train. But at even at an optimistic speed of 15 mph and no stops it was even less attractive to by bike: an impossibility in a single day. So a compromise was in order

Stafford seemed like the ideal place to start: it’s far enough west to get into the countryside and far enough north to still provide a decent ride to Hereford, 80 miles in total. Although I didn’t make it all the way to Hereford by bike (I got lazy and jumped on a train in Ludlow), it was an enjoyable ride and a story worth telling. Inter-city cycling is more feasible than most people think, especially when combined with rail.

The first stage was getting there. I was close to not even being able to get my bike on the train and just caught the tail end of the rush hour on the 08:55 from Leeds to Manchester. In hindsight I’d have booked through East Coast, the only train ticket vendor to send bike reservations in the pos, to ensure bike places, but fortunately I was in luck. The train out to Stafford was more spacious and I was on the road by 11am.

The great thing about smartphones is that they enable flexibility in route planning. Although I had glanced at the route previously on Google Maps, on the day I decided to try the cyclis-specific planning application CycleStreets.net. I was really impressed with the “fastest” route that it chose for me and, with headphones in one ear, I could simply follow the audio instructions about the best way to get out into Stafford. Before long I was in the countryside, flying over the fast and comparatively empty A and B roads that CycleStreets.net directed me to.

It is interesting to compare the distances of routes recommended by cyclestreets.net and Google’s bicycle routes: the former suggests routes of 45, 50 and 55 miles for the fastest, balanced and quietest route options, respectively.

Google’s only offers one bicycle option for the same trip: 53 miles taking you way out West in quite a cirquitous route. The car route is also unacceptable, because it favours fast roads rather than directness, with a distance of 47 miles:

The low-point of the journey: Iron Bridge

The low-point of the journey in literal terms was the bidge at Coalport, a quaint single lane bridge with steep roads either side: 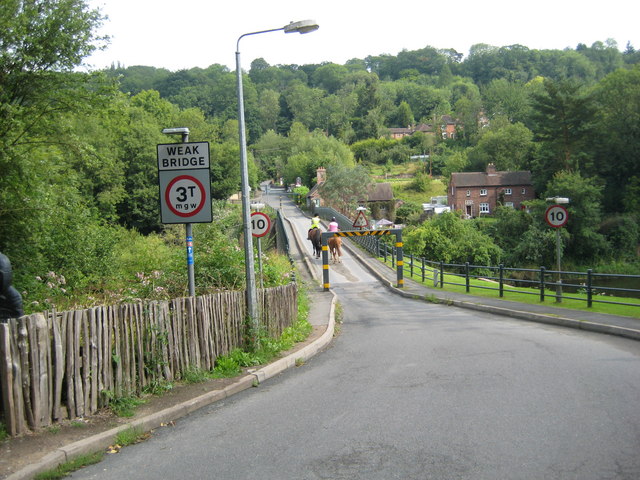 This is not the famous bridge in the aptly named neighbouring settlement of Ironbridge, but is equally impressive. The whole thing was made from cast iron back in 1818!

As mentioned in the introduction, the original plan was to cycle all the way from Stafford to Hereford, ~80 miles. However, with the sun beaming and my energy levels flaking the temptation to get on the train at Ludlow started appealing to me. A phone call with a friend from Hereford sealed it: if I could be back by 5:30 he’d meet me in the pub. Therefore I jumped at the opportunity, passing through Ludlow’s historic market before getting on the train.

This was a really fun ride and for me highlights the benefits of mixing bicycles with trains as a flexible, fast and fun form of transport.